Chloe was just about ready to go to school and she showed me how loose her tooth was. It could lay backwards onto her tongue, but mysteriously wouldn't come out. I asked to pull it and she wasn't having that! I dropped her at school at 12:25pm...she walked into the office to show Mrs. Maxwell (the school director) her loose tooth which now was bleeding and Mrs. Maxwell was aloud to pull it out! 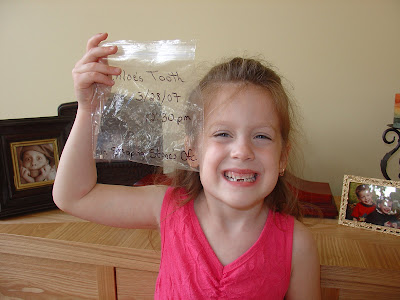 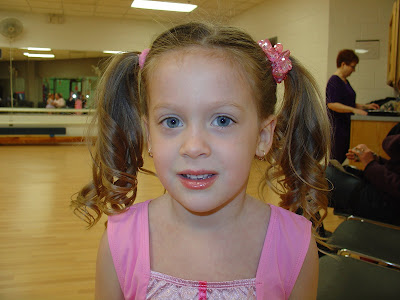 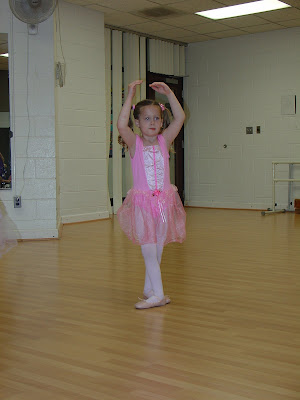 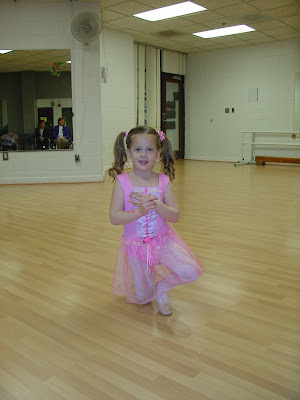 Chloe has informed us she is DONE with ballet. I'm not sure why, because she wears tutu's all the time and loves to be in class. She has been taking this ballet class with the same instructor Ms. Sugar since September 2004 and she's come along way. Ms. Sugar was very sad that Chloe wanted to end her affair with ballet. She told Chloe "Mommy will miss coming to class...will you?" ...Chloe just looked at her and said "NO...I'm DONE!". My brother Ryan has hit a milestone in his life... He got his licence! No, I don't have a younger brother he's actually almost 41 years young and never had a licence. He took his test last week and got a car this weekend. He called us at 8am on Sunday morning and asked what I was doing...besides wiping the sleepers out of my eyes and getting coffee...not much. He just happened to drive down from Rockville to give us a peak. His recumbent bike fit inside his RAV-4 with the back seats out.


How to impress little children...not with a car, but with a cool bike! 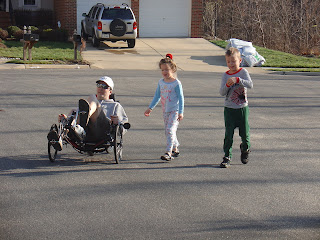 Yes, they were still in their PJ's! The kids got turns on the bike (Scott too) and I got a turn driving the RAV! 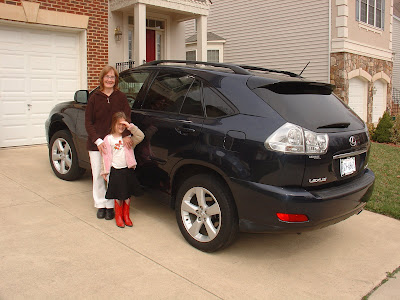 Car fever hit my parents as well. They have been helping out Ryan. He got a lot of drive time in with them. Clark and Ryan have been to car shows and went car shopping together. Sunday we got a call at 7:30pm from my mom telling us she got a Lexus SUV. She stopped by today to give Chloe and I a peak. She gave us a chauffeur ride around the neighborhood. You can't see the color too well, but it's a beautiful blue!


Home Improvements
We've painted a few rooms in the house and I've always wanted to paint the main level. For those of you who have been in our house you can imagine the aches and pains it would take (plus the massive ladder) to paint it all. Scott said 'go for it' so I hired a wonderful paint whom my mom and Clark used a while back. Here are some of our new improvements... 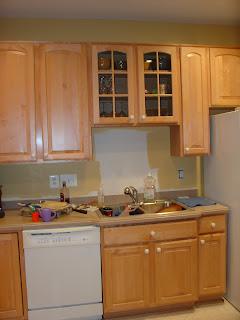 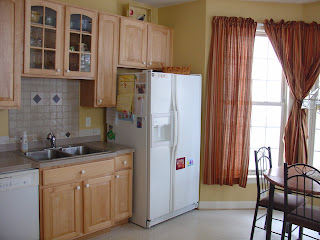 Our kitchen I did by myself..props go to my friend Kara for painting the trim! I painted the room 'Cloudy Amber' and put up tile along the top of the counters plus a back splash. New curtains too! 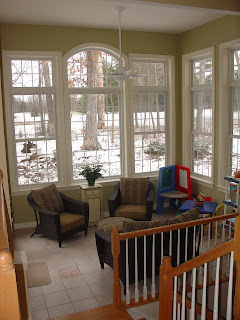 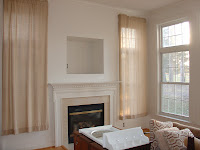 The Sun Room got some new furniture and was painted the color of 'crocodile tears'. The family room got a few new accents and a great paint job! The main color was a 'light amber', but depending on the time of day and what area of the house your looking at it looks slightly different colors...it's quite lovely. 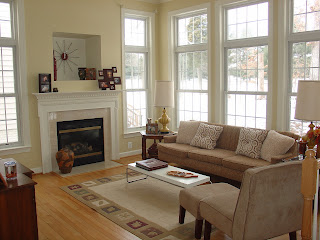 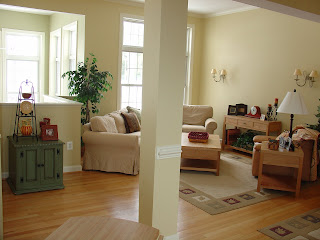 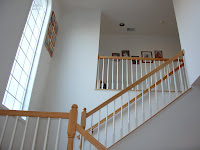 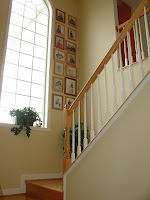 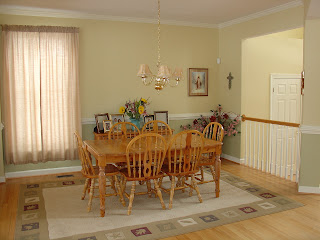 The living room furniture was just moved around with some help from Karen (neighbor/friend/interior designer). She came over one day to help me with my paint color and a few hours later we had moved furniture and found things around the house I forgot I had. The next day we went shopping and filled the car with odds and ends. 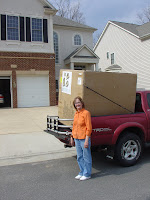 Thanks to Karen for making our house more homey. To Kara for laying on her back on my kitchen floor to paint trim on those windows! To my Mom for the use of her truck and decision making. Not to mention her quick screams as she saw the mammoth box lifting off the back off her truck on the parkway while I was only going about 35mph. She quickly jumped out and bungee corded it down...sort of...I was only allowed to drive 20mph the rest of the way home. Sorry if you got stuck behind me in the left lane! Thank you Sue for helping me unload, put together and carry very heavy items (I hope your not injured)! Also if you need a great painter Marvin Martinez was the best we'd love to refer him! 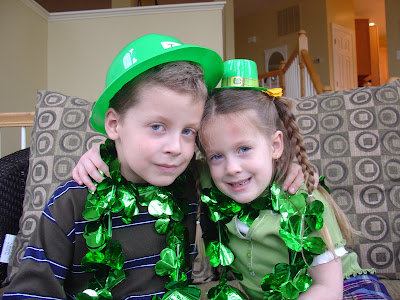 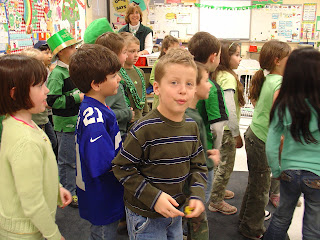 I was able to visit both Isaac and Chloe's classrooms on Friday the 16th. Isaac's class celebrated St. Patrick's Day playing games and having some green doughnuts. 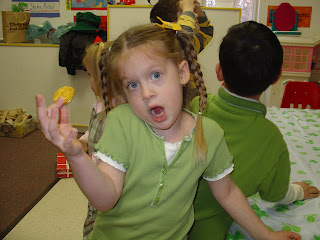 Chloe's class searched for a leprechaun in the school and by the time they got back to their classroom the little bugger had made a mess and dropped some of his chocolate filled gold coins!

On the 17th we had some of Scott's co-workers over to celebrate the end of a 3 month project. This was a great time to sit back, have a drink and relax. Scott has been working day and night along with the others. From what I heard from his co-workers he did an outstanding job! For 3 days he talked for hours to 50 people so he was in need of a drink and relaxation!


Another Sports Highlight of our weekend...

With a valiant effort on our teams part we only lost by 1 goal. The other team told our goalie he was excellent... 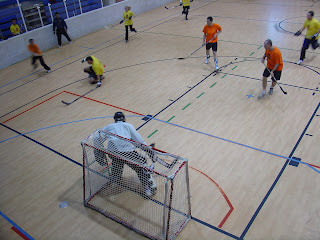 Look Who Our Goalie Was! 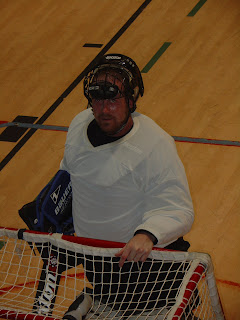 
Highlight from our day... 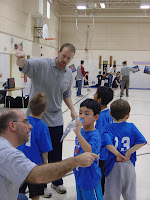 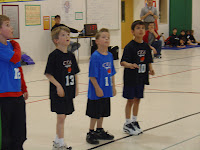 Some time for silliness... 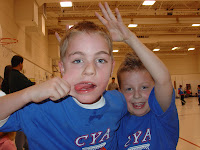 We might have lost, but we are no losers! 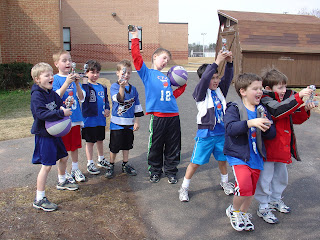 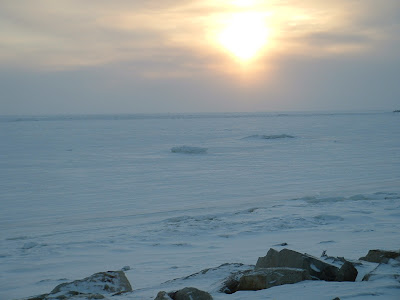 My step-sister Chris doesn't mind me posting this... I had to share this beautiful picture. She is in Nome Alaska right now working (nursing) and thank God for the wonders of email so she can share her pictures and stories with me. The Iditarod is underway and so Nome is starting to get busy. Chris said the ocean is frozen up there (we have no room to complain of cold here) and she walked out onto the Bering Sea about a mile! 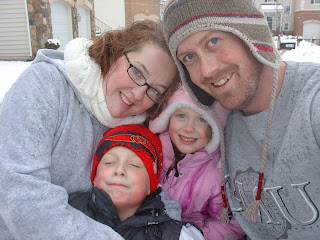 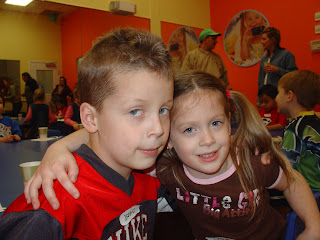 The month of February usually goes by very fast, but not this time. Can't explain that feeling...snails pace...maybe that's the correct phrase. The kids both got sick and so did Daddy! He never gets sick and I always do. For some reason the good Lord let me stay well all month to take care of the living dead. Isaac worried I'd get sick and they would then starve, because Daddy doesn't know how to cook. Isaac's words not mine! Daddy cooks very well...it's called 'take out'.
It was a month for snow...typical in Northern Virginia. We took advantage of the snow days to miss school, go sledding, and indulge in hot chocolate. Scott and Isaac got to attended a Wizards basketball game thanks to someone on their basketball team. We had a poker&pizza night with our friends the McFerren's which was great to see them and spend time since we never get to anymore. We went out to lunch with family in celebration for Scott's Grandparents birthdays. Also the typical stuff, ballet, basketball, hockey, scrap booking and play dates. Glad February is over and March has begun. We are already busy!